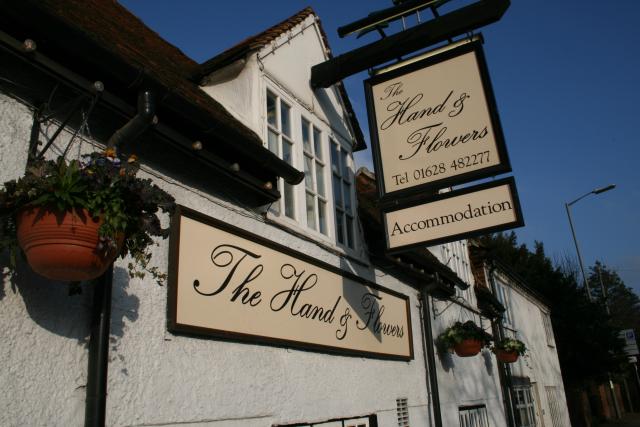 THE HAND AND FLOWERS

Tom Kerridge
Chef Patron of The Hand and Flowers

The Hand and Flowers pub in Marlow, Buckinghamshire, was opened in 2005 by the well-known chef, Tom Kerridge and his wife, Beth. It’s probably no surprise that within a year the Hand and Flowers had achieved its first Michelin Star; Tom had previously been head chef at Adlards in Norwich, which similarly carries the revered Star of approval. Excellence, it’s fair to say, is at the heart of Tom’s work ethic, and his creative genius has since added a further Michelin Star to the credentials of the Hand and Flowers – the only pub in the world to have that status. Reputation is always hard won, and when a Saturday night table requires a pre-booking of approximately five months, it’s safe to assume that your reputation is very well established.

But like any outstanding restaurant, the team, facilities and processes that lie behind the mouth-watering plates of food presented to grateful clients, require the same level of operational excellence to those which are visible front of house. When Tom first established the business, he needed to equip his kitchen from scratch whilst balancing value with operational excellence across all the equipment he purchased.

“When we opened, cost was a significant factor”, says Tom. “We needed equipment that offered the perfect blend of value, reliability and performance. Ultimately, refrigerators are operating 24/7, and you can’t compromise where the preservation of your ingredients is concerned.”

When Tom launched the Hand and Flowers, space in the kitchen area was at a premium, and he sought specialist advice from refrigeration experts on how to best utilise the available space.

"I’m a chef, not a refrigeration expert, and for me, Foster has excelled in that respect.”

Tom continues: “I obviously recognised Foster as being a manufacturer of premium equipment, but it was actually the people I first bought into. I was massively impressed with the initial response I had from Foster, and the advice that I receive from them on an ongoing basis is as important as the quality of the products they manufacture. It’s crucially important to get the right advice on what to buy, where to position it and how to maximise its operational efficiency. I’m a chef, not a refrigeration expert, and for me, Foster has excelled in that respect.”

In the years since the initial launch, Tom and his team have continued to develop the facilities at the hand and Flowers, with more space now available for food storage. Two cold stores now sit alongside various upright refrigerators and a number of counter fridges near the main cooking range.

“The counter units work very hard for their living near the ovens”, says Tom. “It’s a very busy kitchen and the ambient temperatures during service are extremely high, but our Foster counters hold their temperature very well indeed. That’s why you just can’t compromise on equipment of this type. ”

he pub’s success has afforded the business the luxury of being able to worry less about initial purchase cost and more about ongoing efficiency. Tom states that Foster’s ability to produce highly efficient equipment that can genuinely provide cost-savings to the business over time, alongside the brand’s strong reliability, great performance and outstanding aftercare, all combine to make Foster his first choice for all the restaurant’s refrigeration needs.

"Fresh produce simply has to be kept in the best possible condition, it’s as simple as that. Foster products are a key component in delivering that objective, day in, day out.”

“We recently had an issue with knowing where to position the refrigeration units for our coldstores”, says Tom. When Foster recommended hanging the condensing units against a north facing wall rather than in the full sun on the roof, it made perfect sense; not only were we able to free up space inside, but the operational efficiency and cost savings will be significant. Indeed they were also able to take into account my neighbours too by installing their very low noise systems. It sounds so simple, but that’s exactly the kind of advice I’m looking for.”

But for Tom, his refrigeration requirements can be distilled down into something very basic indeed: “It’s about the food. We buy the best ingredients from around the UK and Europe, and we pour every ounce of expertise into turning those ingredients into fantastic plates of food. Fresh produce simply has to be kept in the best possible condition, it’s as simple as that. Foster products are a key component in delivering that objective, day in, day out.”

Jon Farnol, Key Account Manager at Foster says: “It’s important to stress just how aggressive and hot the environment gets in a small high intensity kitchen during busy service. Tom has poured his skill and experience into finding the best ingredients from around the UK and world, he relies on Foster to keep his food in the best possible condition, as fresh as possible, and deliver durable and reliable products that are capacious, a joy to use and very, very cheap to run and own. The way to do that is to just not rely on the brand but by proper planning with professionals in advance giving expert advice, which…and this is the best bit… is free!”

"We want to be the best as Team UK and we want to align ourselves with a refrigeration company that does that."

"I just feel Foster are built differently, and it’s built to last and that’s so important for us chefs in the kitchen."

Michael Caines, Michelin Star Holder, Chef Patron of Lympstone Manor in Devon, shares his experience as a proud owner of a full range of Foster equipment!

When choosing refrigeration equipment for a sizeable staff catering operation at their new flagship Design and Innovation Centre in Munich, the decision for BMW was simple.

“For a restaurant, refrigeration is huge, because you can’t do your daily job without it so for me, to get the best is hugely important and that’s why Foster is the one for me.”

“Opening this school is a life-time ambition for Rosemary, so we knew we had to get the design right. "

"Essentially I looked for the same thing in my refrigeration equipment as I always do for my cooking ingredients: Quality.”

The Hand and Flowers

“I obviously recognised Foster as being a manufacturer of premium equipment, but it was actually the people I first bought into."

“We need to have kit that we can rely on. Foster’s fridges, freezers and blast chillers are something that we use in our kitchen on a day-to-day basis.